"We're not changing our target. We could see 1550, and our target will still be accurate. I

For me, it's about the pace of increase rather than the level. If we go up 10 basis points per day, as we did early this week, I'm going to get scared fast, but if it's slow but steady as I'm expecting, not a problem at all. Stocks are still cheap relative to bonds."

"In a zero interest rate environment, at the short-end, 2 percent for a 10-year Treasury and very little inflation, 14 times growth for the S&P is cheap."

"We're up 30% since the low of October 1st- for six months, that seems pretty quick for me. I think some people are just praying for a pull-back so they can put some money in."

"I don't think we're going to get QE3 if the U.S. economy is growing anywhere close to 3% and unemployment is falling. That's hardly the condition for an emergency, and QE3 is for emergencies. We don't have one, so I think it's on the back burner... The Fed's been a little bit more forward about that and markets have hung in there. For the bears among you, we're appreciating at a slower rate. We're a little overbought. We'll get a correction, but a correction could just be time without much change in price."

Bank Of America: It's Time To Buy Insurance Against A Market Disaster

The market doesn't seem worried by anything, which is why, according to BofA's Ralph Axel, it's time to go long on volatility as a hedge against a tail risk disaster. It's not that a disaster is likely, it's just that this insurance is extraordinarily cheap right now. 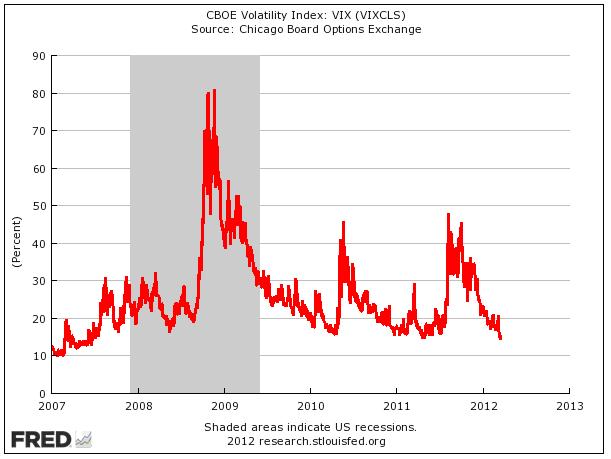 The VIX, a measure of implied volatility of the S&P 500, is also near historical lows. At 15.8 (as of Wednesday afternoon) it is a point above its low of 14.6 going back to the beginning of 2008. The VIX fell to these levels 3 times since the beginning of 2008: in August (before the crisis of September 2008), in April 2010 (before the first euro sovereign crisis), and in May 2011 (before the US debt limit crisis and second euro crisis; see chart). We do not mean to imply that the VIX is signaling a crisis, but we do mean to point out that options are cheap. And history tells us that if one is interested in hedging tail risks, the best time to buy is not in the midst of a crisis or a strong recovery, but at times like now when the market is lulled into a belief that the future holds neither large upside nor large downside shocks.

He also notes that the same lack of volatility is seen in options on US Treasuries... there's still a general belief that the market isn't going anywhere.

Furthermore, history suggests that a surge in equities (like what we've seen so far in Q1) will be followed by both a rise in yields, and a rise in volatility.

This table shows that going back over the last decade, quarters which saw a rise in stocks tended to see a decline in yields and the VIX, but that in subsequent quarters, 10-year yields tended to jump, and the VIX arrested its fall. 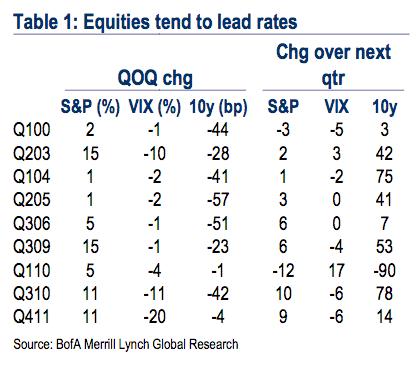 What it finds is that 3 times in the past, a period of sideways stock market action (denoted by the dashed boxes) finally ended when the Treasury market made a turn. In the early 20s, 50s, and 80s, it was a major reversal in yields that caused the market to jut higher. The market's currently in another box, still below its highs of 2007, which of course were right around the highs made in 2000.

GUNDLACH: Rates Will Keep Rising, But Then They'll Start Killing The Recove

Now that Treasuries have broken out to higher yields after six months of mind-numbingly low volatility, it is logical to expect the move to higher rates to last more than one week," Gundlach said. "The way things look today I think a move toward 3.25 percent would weaken the economy noticeably."

There were two significant shifts in net speculative positioning it the week ending March 13, according to the latest Commitment of Traders report. The first is an acceleration of the short covering in the euro. The second is the extension of short yen positions.

There were two significant shifts in net speculative positioning it the week ending March 13, according to the latest Commitment of Traders report. The first is an acceleration of the short covering in the euro. The second is the extension of short yen positions.

The fact that the euro held support near $1.30 is important. That is the bottom of the $1.30 to $1.35 trading range that has confined the euro through most of the first quarter. There is scope for the euro to test the $1.3250-$1.3300 area in the days ahead. The dollar may fare a bit better against the yen, but is more likely to consoldiate then trend higher.

In the week through March 13, the net speculative short euro position was cut from 116.4k contracts to 99.3k. It is the first time the net shorts have few than 100k contracts since early December. The change is almost solely the function of shorts being reduced (16.k) than new longs being established (382).

The net short yen position jumped from 19.4k to 42.4k contracts in the most recent reporting week. This is the largest net short position since April 2011. Since the financial crisis began in the second half of 2007, the net short yen position has been only rarely and briefly larger than it is now. The shift in positioning reflects almost in equal measure longs capitulating (11k) and shorts being established (12k).

Net short sterling edged higher to 41.8k contracts from 37.1k. This is the largest net short position since early December. It was largely a function of new shorts entering the market, but these were in week hands and the fact that $1.56 support held in the spot market suggests that some of these short may have been forced out. Sterling looks poised to re-test the upper end of its range in the $1.59-$1.60 area.

For the most part, Swiss franc, Canadian dollar and Australian dollar positions were little changed. The net short Swiss franc position was cut by about 5k to 14.8k contracts, which is the smallest net short position since in a little more than a month.

The net long Canadian dollar position edged higher by less than 1000 contracts, but it was the sixth consecutive weekly build and the largest since July 2011. Nevertheless, the Canadian dollar appears poised to suffer on the crosses in the days ahead, especially against the euro, sterling and Australian dollars.

The net long Australian dollar position rose to 66.8k from 61.7k, due to an increase in longs and a reduction of short positions are roughly the same amount. The Aussie held key support near $1.04 and can recover toward $1.0650-$1.07 in the period ahead.

Lastly, given the sharp jump in US yields recently, we took a look at the Commitment of Traders for the futures on the 10-year Treasury note.. The net short position leaped to 77.3k from 23.3k and is the largest short position in five months. Longs were cuts by 30.5k and and shorts added about 23.4k contracts.

Dalio's article, "An In-Depth Look at Deleveragings" is apparently authored by him